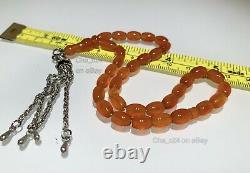 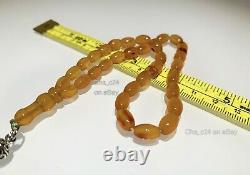 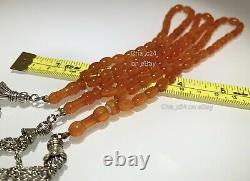 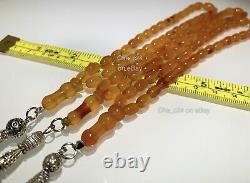 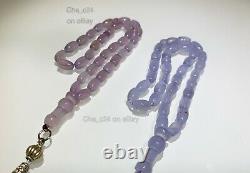 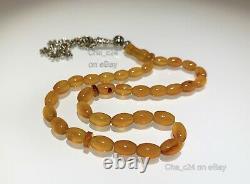 Rare Yemen Aqeeq Prayer Beads - Natural Stone - Sufi Muslim Tasbih Islamic. Prayer beads carved by hand from Yemen Aqeeq stone. This is for One Tasbih only. Please Note: Exact Color of the Stone may Vary!
Let us know which color you prefer. We will send you pictures of options. These beads are 33 in number (11-11-11) and are approximately 9-10 inches in length, including the tassel. Aqeeq stones have a very important position in Islam. It is a special gemstone for Muslims. It is also important in other religions due to known as the oldest gemstone and has been in use from the time of Hz. It has been possible to find Aqeeq in different colors. Red, Green, White, milky white, yellow, black, and gray colors. It has more than a hundred types.
But most powerful and highly sought after Aqeeq stones are the Yemeni aqeeqs, which is rare. Yemeni Aqeeq has a liver red color and comes from Yemen, hence Yemeni Aqeeq. Which are very expensive and difficult to obtain. Unfortunately, you will see some people sell Aqeeq stone rings as Yemeni over some websites like. They are not Yemeni so have no real value.
First of all, if you are wearing. Because of its benefits, you should have real Aqeeq stone, which is not possible to find that other sellers tell YOU. Here are some of the key benefits of wearing a real Aqeeq Ring. Wearing Aqeeq Rings helps and aids you by creating joy in your heart and is good for the eyesight and it also helps eliminate depression, sadness, and high tension as well as anger. This stone absorbs the rays of the sun and passes the absorbed stone to your body.
That is why it is very important that it is in contact with your skin. Aqeeq stone is also good for your health, your fears and loneliness. It gives a sense of strength and courage. As in Islam, believes that there are mountains of Aqeeq in Heaven.

If you wear Aqeeq stone as a ring or any jewelry (to carry easily, you can also carry stone only), your Rizq (sustenance, income) will be increased. You will be protected from black magic, dangers, and accidents. Aqeeq will also protect you from enemies. The Holy Prophet of Islam Rasooallah has said whoever wears Aqeeq his wishes will be fulfilled. A hadith from Janabe Salman Farsi states that the last Prophet requested Imam Ali to wear a ring on the right hand so that he may be listed among the Muqarrabeen (those near to Allah). The Imam asked the Prophet as to whom the Muqarrabeen were, to which the Prophet replied Janabe Jibreel and Janabe Mikaiel. Then the Imam inquired as to which stone he should wear.
The prophet replied Aqeeq Stone, as this liver red stone had accepted the Oneness of Allah. The Prophethood of the late Prophet, and the vicegerency of Ali ibne Abi Talib.
For Aqeeq Stone; Imam Ali ibn Abi Taleb has said wear Aqeeq on your rings, you will be blessed and will be saved from afflictions. About Aqiq Stone; Imam Jaffar e Sadiq has said that prayer with Aqeeq is 40 times better than one without. For Aqiq; Imam Musa e Kazim said that its a great sawab to use tasbih of Aqeeq. About Agate Stone; Imam Muhammad Taqi stated that Aqeeq takes away poverty and dissolves differences in one's heart. For Yemeni Aqiq; Imam Muhammad Baqar has stated that if a person possesses a ring set in Aqeeq and turns in towards his palm and then looks at it, and recites Surah Qadr (chapter 97), then Allah keeps him protected the whole day from trouble, wherever they are descended from heaven or earth and he will be protected until the evening by Allah, and Allahs friend who will guide him. Imam Reza has said, Whoever wears a ring with an Aqeeq on it, firstly he will not become needy and secondly what God has destined for him, will be good. Shah Maghsoud Maksoud Maksood Maqsood Lemon Stone Sufi Islamic Muslim Islam Zikr Dhikr Afghanistan. Tasbih Misbaha Tesbih Rosary Chaplet Chapelet Sibha Sufi Tijani Shadhili Qadiri Naqshbandi Chisti Senegal Moroccan Algeria Tunisia Mauritania Maroc Mauritanie Chaplet Korous. The item "Rare Yemen Aqeeq Prayer Beads Natural Stone Sufi Muslim Tasbih Islamic #3" is in sale since Saturday, September 26, 2020. This item is in the category "Collectibles\Religion & Spirituality\Islam\Prayer Beads". The seller is "cha_c24" and is located in New York, New York.