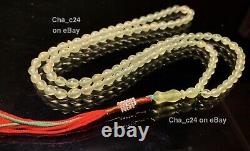 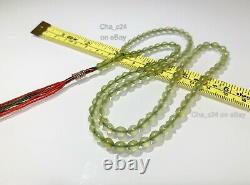 Rare Shah Maghsoud Prayer Beads - Natural Stone - Sufi Muslim Tasbih Islamic. Prayer beads carved by hand from Shah Maghsoud stone. These beads are 99 in number (33-33-33) and are approximately 15.5 inches in length, including the tassel. Please Note: Exact Color of the Stone may Vary!

Shah Maghsoud is famous for its beautiful glow under sunlight and its uniquely warm feel when held as compared to other stones. Deposits of Shah Maqsood stone are found in the mountains of Khakrez district. Ustad Qasim said stones for making beads were brought from the mountains in Khakrez district and the stones, particularly Shah Maqsood stone, were precious and famous. He said finding the precious stones was not an easy job. Residents near the mountains endured hardships extracting the stones before bringing them to Kandahar City for sale, he said.

In the past when electricity was not available, making beads was a tough job, which had relatively become easy after electricity arrival. The process of making beads goes through six phases. First breaking stones then cutting them into the size of beads before grilling them. Then the beads are sifted. The fifth phase is carving and the final phase is wire wrapping. He said in the past when most work would have been performed with hands, a single set of prayer-beads would take a week to 10 days. Shah Maghsoud Maksoud Maksood Maqsood Lemon Stone Sufi Islamic Muslim Islam Zikr Dhikr Afghanistan.