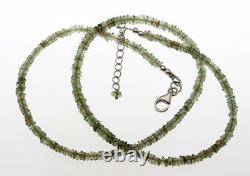 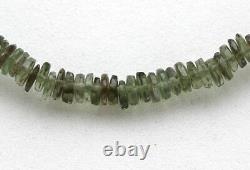 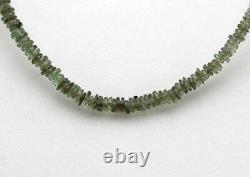 This high quality faceted moldavite necklace weighs 47.75 carats. It measures 18 inches, or 45 cm, long. The bead range in size from 4 mm in the center of the necklace to 3 mm at the ends. Auctions you win are added to your cart automatically.
This is a very nice, and highly translucent faceted moldavite necklace. If you don't know what moldavite is well then, get ready to be amazed!
This is the product of an ancient meteorite impact 15 million years ago, in the middle of what is now the Czech Republic. The earth at the impact site was turned molten by the impact and thrown into the atmosphere, cooling as it fell and solidifying into this beautiful, glassy green tektite. It is highly collectible and more and more rare all the time. It it getting more difficult to find, especially in pieces as clear and high quality as this one. The IMCA is a highly prestigious organization that is even difficult to attain membership and it is guarantees the genuineness and authenticity of meteorites and meteorite related items that I sell. If you have any questions, do not hesitate to ask me. Thanks so much for visiting my listing and have a great day! This is an organization that is a check and balance of those who collect, trade and sell meteorites. You can only join this organization by having the utmost integrity. You must to have two references from existing members to get in and a good reputation. Members of this organization maintain a high standard by monitoring each others' activities for accuracy and honesty. It is every IMCA member's responsibility and pleasure to offer help and assistance to fellow members in order to ensure specimens are genuine. This is a very tight-knit community made up of meteorite hunters, dealers, collectors, and scientists who look out for each other to make sure that the meteorites offered to the public are authentic and genuine. From Wikipedia, the free encyclopedia. Moldavite from Zataka, Bohemia, Czech Republic. 5.5[1] to 7[2]. 2.32 to 2.38. 1.48 to 1.54.
Moldavite (Czech: Vltavín) is a forest green, olive green or blue greenish vitreous silica projectile rock formed by a meteorite impact in southern Germany (Nördlinger Ries Crater)[3] that occurred about 15 million years ago. [4] It is a type of tektite. Moldavite was introduced to the scientific public for the first time in 1786 as "chrysolites" from Týn nad Vltavou in a lecture by Josef Mayer of Prague University, read at a meeting of the Bohemian Scientific Society (Mayer 1788). Zippe (1836) first used the term "Moldavite", derived from the Moldau (Vltava) river in Bohemia (the Czech Republic), from where the first described pieces came. Suess pointed out that the gravel-size moldavites exhibited curious pittings and wrinkles on the surface, which could not be due to the action of water, but resembled the characteristic markings on many meteorites.
He attributed the material to a cosmic origin and regarded moldavites as a special type of meteorite for which he proposed the name of tektite. Because of their difficult fusibility, extremely low water content, and chemical composition, the current consensus among earth scientists is that moldavites were formed about 14.7 million years ago during the impact of a giant meteorite in the present-day Nördlinger Ries crater. Splatters of material that was melted by the impact cooled while they were actually airborne and most fell in Bohemia.
Currently, moldavites have been found in an area that includes southern Bohemia, western Moravia, the Cheb Basin (northwest Bohemia), Lusatia (Germany), and Waldviertel (Austria). [6] Isotope analysis of samples of moldavites have shown a beryllium-10 isotope composition similar to the composition of Australasian tektites (australites) and Ivory Coast tektites (ivorites). This section needs additional citations for verification. Please help improve this article by adding citations to reliable sources. Unsourced material may be challenged and removed. (January 2018) (Learn how and when to remove this template message). Ninety-nine percent of all moldavite finds have come from the South Bohemian localities, one percent were found in South Moravian localities. Only tens of pieces were found in the Lusatian area (near Dresden), Cheb basin area (West Bohemia) and Northern Austria (near Radessen). Principal occurrences of moldavites in Bohemia are associated with Tertiary sediments of the eské Budjovice and Tebo Basins.

The most prominent localities are concentrated in a NW-SE strip along the western margin of the eské Budjovice Basin. The majority of these occurrences are bound to the Vrábe Member and Koroseky Sandy Gravel.

Prominent localities in the Tebo Basin are bound to gravels and sands of the Domanín Formation. In Moravia, moldavite occurrences are restricted to an area roughly bounded by the towns of Tebí, Znojmo and Brno. The colour of Moravian moldavites usually differs from their Bohemian counterparts, as it tends to be brownish.
Taking into account the number of pieces found, Moravian localities are considerably less productive than the Bohemian ones; however, the average weight of the moldavites found is much higher. The oldest (primary) moldavite-bearing sediments lie between Slavice and Tebí. The majority of other localities in southern Moravia are associated with sediments of Miocene as well as Pleistocene rivers that flowed across this area more or less to the southeast, similar to the present streams of Jihlava, Oslava and Jeviovka. The chemical formula of moldavite is SiO2(+Al2O3). Its properties are similar to that of other types of glass, and reported Mohs hardness varies from 5.5[1] to 7. [2] Moldavite can be transparent or translucent with a mossy green color, with swirls and bubbles accentuating its mossy appearance. Moldavites can be distinguished from green glass imitations by observing their worm-like inclusions of lechatelierite.

The total amount of moldavite scattered around the world is estimated at 275 tons. There are three grades of moldavite: high quality, often referred to as museum grade, medium quality and regular grade. All three grades can be told apart by their appearance. The regular grade pieces are usually darker and more saturated in their green colour, and the surface is seen as closely spaced pitting or weathering.

This type sometimes appears to have been broken apart from a larger chunk. The museum grade has a distinct fern-like pattern and is much more translucent than the regular grade. There is usually a fairly big difference in the price between the two. High-quality moldavite stones are often used for hand-crafted jewellery. There is a moldavite museum, Muzeum Vltavín, in eský Krumlov, Czech Republic. [9] The Moldavite Association was established in Ljubljana, Slovenia in 2014. The association researches, exhibits and promotes moldavites and other tektites around the world and has member geologists from more than 30 countries worldwide. The item "RARE Moldavite Faceted Bead Necklace HIGH GRADE Gemstone Tektite AUTHENTIC 43ct" is in sale since Sunday, September 6, 2020. This item is in the category "Collectibles\Rocks, Fossils & Minerals\Meteorites & Tektites". The seller is "callistodesigns" and is located in Tucson, Arizona. This item can be shipped worldwide.