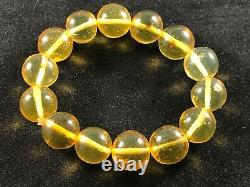 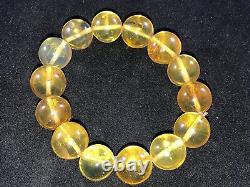 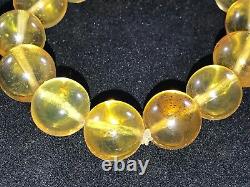 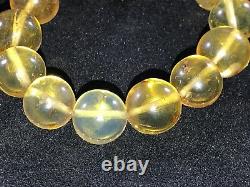 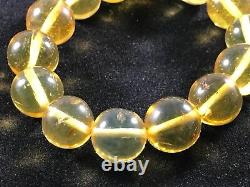 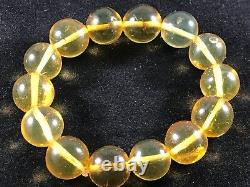 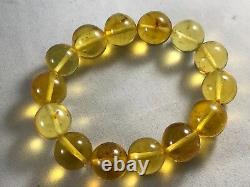 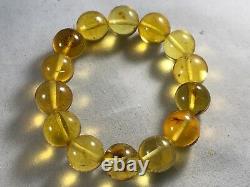 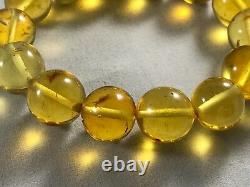 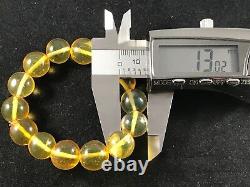 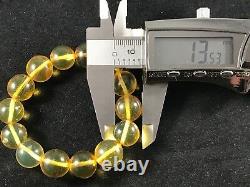 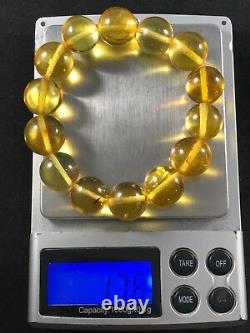 No it not, is very confusing We Know that it is a result of Fluorescence and no solid colors Ultra-Violet or violet light ir re-emitted as Blue or Green light attributed to the presence of ploy-nuclear aromatic omlecules. (Gemology Comelius S Hurlbut, Jr Robert C Kammerling). When sunlight strikes the Blue Amber on a white surface the light particles pass right through and are refracted by the white surface. Result: the Blue amber looks almost like any other Dominican amber, only with a slight blue hue. The light particles cant refract off the black surface, so it is the Amber that refracts. The hydrocarbons in the Blue Amber turn the suns ultraviolet light into blue light particles. The result: the famous blue glow of Blue Amber. A similar reaction you will find in the green Dominican amber. Other Dominican amber will show this refraction only in concentrated UV light, but not in natural light. All my pictures have been taken with a regular digital camera in the shade of our verandah, without any artificial light. Find more information on our page. Because of the difficulties involved in mining BLUE AMBER, and the very few locations where its found. BLUE AMBER stones are very rare. And becoming scarcer every day. But they will go up as availability goes down. Greetings Dear Customers, Im gladdly presenting here these Beautiful Unique Dominican Amber Fossils, ALL the stones comes from the mines of La Toca, Los Cacaos in Santiago los Caballeros - Dominican Republic. We take pride in making these unique stones museum quality look beautiful after a deep cleaning process, we have many pictures in our website demostrating the mines and where the cleaning process has place, you can visit us at. ALL these unique stones are 100% Dominican Amber, we DO NOT sale fake items. At the bottom there are a couple of easy steps of how you can make a test to proof it.
All amber at the Amber Gallery is genuine Dominican Amber, and has been obtained from reputable sources, and has been carefully examined with a microscope and by other methods personally to guarantee you its authenticity. We ONLY sell genuine Dominican amber with fossil inclusions, such as insects, spiders and plant fragments.
Do you own any amber that has a questionable heritage? You can't always tell just by looking, even for an expert, so it pays to have important pieces checked out carefully. An One of the simplest non-destructive tests that you can do yourself is to clean and taste the specimen.
Carefully washing with soap and water, then with just water, should leave a clean specimen ready for this test. Lick the specimen slowly several times, allowing the subtle taste to linger. It should be extremely subtle - real amber has almost no taste at all, leaving at most a very slight, tingly sensation. We think this "taste" may actually be just a touch sensation, not a true response of the taste buds.
Most plastic or other polymer forgeries, on the other hand, carry a distinctly nasty taste that screams, Imitation! Don't be fooled, remembering this simple taste test can save you considerable trouble in your adventures with amber. This is the simplest and safest test. Amber is warm to the touch and when rubbed, it will become electrostatically charged and will attract lint/dust particles. This is what the ancient Greeks discovered and named it "electron", which is where we get the term "electricity". The immature resin copal, and plastic fake amber will deteriorate when in contact with a solvent. Plastics are quickly attacked by alcohol (95% ethyl alcohol), acetone (100%), and ether. A few drops of acetone (fingernail polish remover) or alcohol dripped over the surface of the piece will reveal if it holds up to the solvent. If the surface becomes tacky, it's not amber. Amber will not feel tacky or dissolve under these solvents. Amber will float or be buoyant in seawater.

This is why it washes up on the beaches of the Baltic after a storm. Salt-saturated water (about 2.5 tablespoons per 1 cup water) will show that imitations of amber will sink in salt water.

Amber heated will produce a whitish smoke and smell like burning pine wood, sweet and pleasant. This is why amber has been used by ancient civilizations as incense for many centuries. Amber is identified from plastic imitations with a hot point test (hot needle held with tweezers).
When the hot point touches the suspected amber in an unobtrusive place, the material will burn and give off an odor. (Plastics= a disinfectant type odor of camphor or carbolic acid, Amber= burning pinewood). The hot point will make the plastic sticky and leave a black mark. The hot point will make amber brittle and chip off.

When celluloid is dipped in hot water or heated, it gives off the odor of camphor. Other plastics give off the unpleasant smell of carbolic acid and no smoke. Geological data for amber from sedimentary deposits in the Dominican Republic predict an age dating to the Oligocene, in the range of 20 to 30 million years old, presuming the resin is a primary in situ deposit, and not a secondary deposit by transport/erosion etc. Dominican amber from Cotui, however, is Pliocene or Pleistocene, has larger and more insects, and is otherwise indistinguishable from older material from the dated sedimentary deposits. Since resin-producing trees are still abundant in this tropical island area, resins of any age are possible.

The older fossil resins are from deep mines in the hillsides, and the extraction can be a dangerous proposition, with risk of being buried in a cave in. The insect inclusions in Dominican amber are fairly abundant, the insects larger, and the amber of higher clarity than found in amber. Though uncommon, fossil association are found more frequently in Dominican amber. Fossil Amber or Fossil Resin. Amber is the popular name for fossilized resin of botanical origin. The proper scientific terminology is fossil resin, but we will use the terms amber and fossil resin interchangeably. The word amber also denotes a golden color that amber predominately reflects (recall that when human eyes see color, it is actually the portion of the visible light spectrum that an object reflects that is detected). In fact, amber reflects many frequencies of light, including red, green and blue that together constitutes the entire visible spectrum. Archeological findings show that amber was one of the first materials prehistoric humans used for ornamentation, with instances dating back as far as 30,000 years. Use of fossil resin for jewelry and other decoration continues unabated, and amber is often considered as a gemstone.

Scientific value in the study of taxonomy and evolution. Animal inclusions are usually invertebrates, specifically arthropods, and only extremely rarely a vertebrate such as a tiny lizard. Fossil resin inclusions are predominately insects, which should be no surprise since botanical resin is an evolutionary adaptation of plants that is, in part, for protection against insects. Fossil Amber Chemistry Fossil resin's molecular constituency is mainly carbon and hydrogen atoms that readily form hexagonal rings. Molecular bonding between the rings increases over time (called polymerization), and the sticky resin becomes hard.

There are other types of atoms in trace to larger amounts that alter physical properties and may be substrates to certain organic solvents. For all practical purposes, the hardened resin, or amber, is a "plastic". Just when the resin becomes amber, or a fossil, is not defined, and is perhaps not definable. It is even contentious, since fossil resin is a commercial product in a competitive market.
Younger amber is often called copal, though it is essentially as hard and its physical properties differ little from older resins. All fossil resins are substrates for both hydrophilic e. Alcohol or acetone and lipophilic e. Benzene organic solvents and will disolve in them. The solvents will create various weak chemical interactions with the resin in order to solubilize it. The most common of these interactions are the relatively weak van der Waals interactions (induced dipole interactions), the stronger dipole-dipole interactions, and the even stronger hydrogen bonds (interaction between O-H or N-H hydrogens with O or N atoms). Diamonds (and most mineral based gems) are forever, but fossil resin (amber) is not. As an unstable organic polymer, amber is biodegradable, just like a plastic milk jug or fiberglass boat. Its many weak covalent bonds and weaker hydrogen bonds are easily broken, a process that is accelerated by electromagnetic radiation of all frequencies and heat; ultraviolet is especially damaging (do not expose amber to sunlight), while visible and infrared much less so. Thus, while amber is, in a sense, the perfect preservative of fossils, once removed from the environment in which it formed, it is destined to crumble into dust; the time is long compared to the human lifespan, but essentially instantaneous on a geological timespan.
Diamonds, on the other hand, go on forever. Amber, Natural Selection and Chemical Warfare Fossil resin a. Amber is the result at least in part of nature's oldest drama, predator versus prey. Science does not yet know when it appeared in the Kingdom Plantae's arsenal of survival tactics, but natural section has conserved and probably diversified its usage.
In temperate climates, the pines are prodigious producers of resin, which is used to make turpentine. In tropic climates, the genus Hymenaea, a timber tree, is the prolific producer. The evolutionary advantages of resin are varied. The resin is exuded to seal wounds such as from wind, fire, lightening or insect predation. Resin also contains a diversity of chemical defensive weapons.
Some of these repel insects, and others attract insects that attack harmful insects, or attract parasites of insects that attack the plant, or are toxic to harmful fungi; in short a diverse chemical arsenal. A Container for the whole Tree of Life In terms of the Tree of Life, amber is most interesting since it entombs all three domains, Arachaea, Eubacteria and Eukarya.
Archaea and eubacteria microbes are, of course, everywhere and surely embedded in the amber at high density. Interestingly, it is possible that some microbes. Still controversial finding a decade old claims to have recovered from the gut of a Hymenoptera from 30 million year old Dominican amber some three-dozen species of bacteria from ancient spores that grew on culture plates. The bacteria are from the extant genus Bacillus, a group that go dormant forming spores. Interestingly, Bacillus thuringiensis is used in the biological control of insects. Bacillus thuringiensis parasitizes the caterpillars of some harmful moths and butterflies.
Spraying or dusting plants with its provides some protection against gypsy moth, tent caterpillar, and the tobacco hornworm. The bacteria has a gene that produces a toxic chemical warfare.
The gene for this toxin has also been introduced into some crops. Get Images that Make Supersized Seem Small. Auctiva's Listing Templates improve your auctions in minutes. Attention Sellers - Get Templates Image Hosting, Scheduling at Auctiva. The item "BEAUTIFUL CLEAR DOMINICAN AMBER BRACELET UNIQUE STONE RARE GEM 17.8g 13mm 12" is in sale since Monday, April 1, 2019. This item is in the category "Jewelry & Watches\Loose Diamonds & Gemstones\Loose Gemstones\Amber".
The seller is "ambergalleryboutique1" and is located in Bayamon, Puerto Rico. This item can be shipped worldwide.